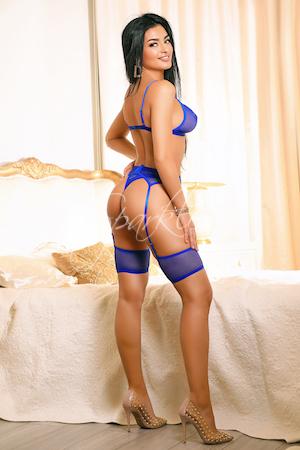 Jenni was lounging on the sofa flicking through her Instagram account and paying attention to one account that she had been messaging a guy on, this guy was someone that she briefly met when she was 18 years old and back then he was good looking. Jenni was not confident back when she was 18 and not comfortable with her sexuality and how she conducted herself as a female, so approaching Ricky was not an option for her at that time. But now in her late 30’s Jenni was more than confident with her sexuality and was ready to meet up with Ricky, as she checked out his pictures she thought although he had aged he was still as handsome as he was back then, a defined symmetrical face with brown hazel eyes and full lips.

There was no mistaking that Jenni was feeling great feelings of lust for Ricky now all she had to do was wait for him to ask her out on a date, their Insta chats had been leading towards it and it seemed that neither one was ready to take that leap into the unknown. Jenni closed her eyes and imagined Ricky from head to toe, he is around 5’11 from Caribbean decent with a bald head, hazel eyes and the most handsome face with full lips that she just wanted to kiss and kiss, his body was gym defined and muscular, slight grey chest hairs which showed his maturity in his good looks. Jenni thought this is more than physical lust she had a need to want to listen to him talk and converse with her about his studies and what he had achieved at his recent studies into business.

Jenni thought this is getting to much and needed to take a shower to distract her brain from over thinking to much about Ricky, so off to the shower she went, “ hmm lets have a posh shower” and Jenni selected the Molton Brown shower gel and climbed into the shower, after lathering up her body with the distinctive smell of pink peppercorns she stood underneath the monsoon shower head and felt the patter of the water over her face, ohh this felt so good.

Whist Jenni was in the shower dreaming of distant shores far far away, Ricky was on his Instagram account and thinking of Jenni and how he wanted some physical intimacy with her, Ricky could only think of the physical side of things and wasn’t interested in anything further at this stage. Ricky stopped at a picture of Jenni in her bikini whilst in holiday in Barbados, wow what a figure, full breasts and long hair down to her bum, “oh the things I could do with that body”, what he wanted to do was tell Jenni to come over right now and arrive naked at his door with just a coat on!